Whilst our Customer Service Team are extra busy right now, it might be easier to find what you need here online. Existing customers can use their own secure portal to view information relating to ongoing claims. Thank you

Tinnitus: Ringing the in the ears

Tinnitus is the name for hearing noises in one ear, both ears or in the head that doesn’t come from an outside source. An estimated 1.05 million GP consultations take place every year in the UK, with the treatment pathway for tinnitus costing the NHS £750 million.

Approximately six million people in the UK are living with tinnitus and this is set to rise by more than half a million by 2028!

According to the British Tinnitus Association, their research found that 15% of sufferers said the condition had led to suicidal thoughts.

Most people describe tinnitus as a ringing in the ears, but others say it also sounds like:

Occasionally, tinnitus can sound like fragments of tunes or songs. This is known as ‘musical hallucinations’.

Anyone can get tinnitus, no matter what their age, although it is more common in people who have hearing loss or other ear problems, it can also be found in people with normal hearing. An estimated 10% of the UK adult population experience tinnitus frequently. Around 5% find it affects their quality of life.

The exact cause of tinnitus is not known, research is still ongoing to find out. However, there is a link between tinnitus and hearing loss. Most cases of tinnitus are linked to hearing loss caused by damage to the inner ear, such as through normal ageing or exposure to loud noise.

Here are some other known factors involved in the development of tinnitus:

1. Injury to the ears or head

4. A side effect of medication

Research from The British Tinnitus Association has found that tinnitus can put a huge strain on someone's mental health as it can affect a person's social life and career. The charity is calling for increased investment into the condition to help find a cure.

"Tinnitus gets 40 times less funding than conditions like anxiety and depression despite having correlations and being quite similar in terms of the impact. So we really need more money into looking for a cure." – Kerry Chase, British Tinnitus Association

The BTA offers a confidential tinnitus helpline. You can for support, and they may be able to point you in the right direction for local support groups. For more information, visit their website: www.tinnitus.org.uk/helpline

If you are suffering from tinnitus, there are different strategies out there that can be very helpful:

Tinnitus can seem more noticeable and sound louder in quiet environments. At night, you can try sound therapy by filling the silence with calm, neutral sounds to distract you from the noises in your ears.

Techniques such as Cognitive Behavioural Therapy can help you manage the effects tinnitus has on your life by giving you techniques to help with the stress and anxiety brought on by tinnitus. If you have a better understanding of tinnitus and your thought process, you’ll feel more confident about managing it effectively.

Not only does exercise help the body achieve a higher level of well-being, but it can be an effective way of distracting you from the constant noise!

It is quite common to feel anxious and afraid when you first experience tinnitus. Stress can be a trigger of tinnitus which will make you feel more agitated. Try to relax more and you may notice your tinnitus less. Among the different types of relaxation are yoga, tai-chi and meditation.

When it comes to health, you can rely on General & Medical to look after yours. When you take out one of our healthcare policies, we’ll give you access to our complimentary Health and Wellbeing Services which has a whole host of support. Get your free quote today to see how little private health insurance could cost you! 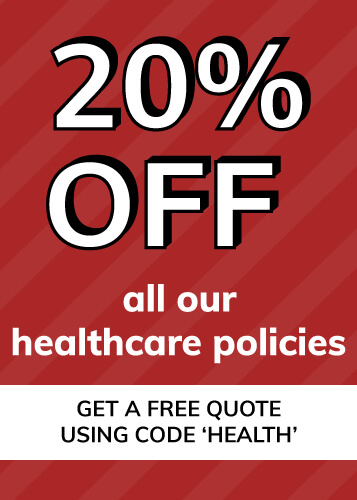 We want to help you kickstart your health which is why we're giving you 20% off all our health insurance policies. It's time to start protecting the health of you and your family so get your free quote today and see how little private healthcare could cost you!
* Terms apply.

We’re proud of our 5 Star service.

We offer Private Health Insurance that can cover some pre-existing conditions.

Our Private Health Insurance has been designed to suit all needs and budgets, take a look to see what covers we have available. You can also enhance your cover to include pre-existing conditions, add Multi-Trip Travel Insurance or include in-patient mental health treatment.